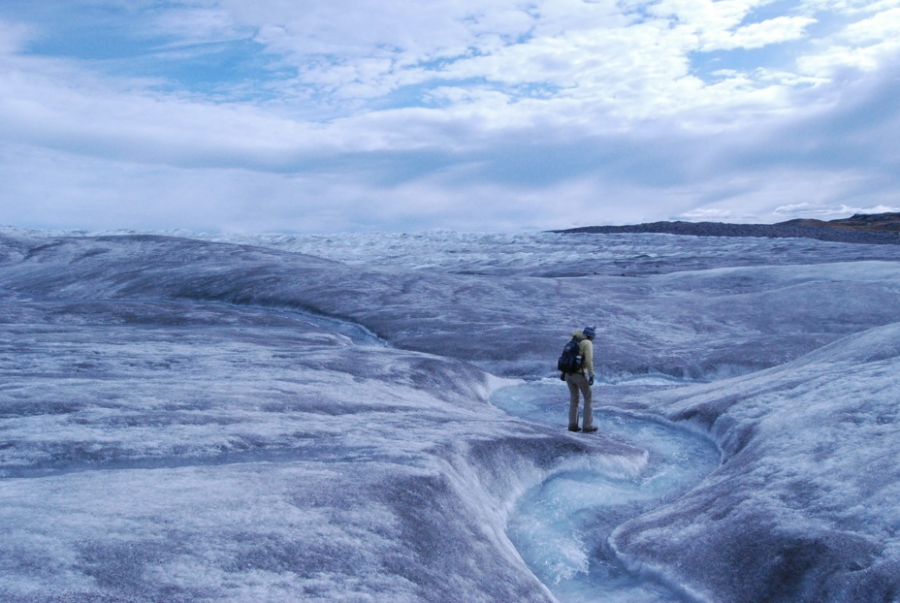 A person stands in front of a Greenlandic melt water stream

Here in Southern California, it feels like summer all-year round, but for one of the iciest places in the world, more sun, means more melting.

Over the weekend of Sept. 3-4, the Greenland ice sheet faced an extreme heatwave, resulting in melting typically seen in the middle of July. Tens of billions of tons of ice were lost, an event with the likelihood of contributing even more to the earth’s rising sea-levels.

In the next century, scientists predict that melt water from the Greenland ice sheet will inevitably raise sea-levels by over ten-inches, in addition to other big contributors (other ice sheets or glaciers). And 10 inches is really a base-line prediction.

According to Climate.gov, rising sea-levels “threaten infrastructure,” cause storm surges to move further inland, and increase the frequency of high-tide flooding, all of which will effect the eighty-seven million people living along American coastlines.

Apart from concerns about rising sea-levels, the Greenland ice sheet is also millions of years old. It is very possible for ice caps and glaciers to contain harmful viruses, including things like smallpox and the Spanish flu, both of which can be fatal.

So amidst all this talk of melting ice and deadly sicknesses, what can we do?

“Desensitization does occur… In psychology, this is termed as sensory adaptation. Just like when you jump into a pool of cold water it feels freezing at first, and over time you get used to it,” says Chen. “News of climate change can similarly be initially jarring, but then doesn’t feel as critical.”

Yet despite the adaptation to certain news, in their effort to address climate change, the United Nations site states, “Education empowers all people, but especially motivates the young to take action.”

Neimeyer provides us with a list of resources which include information regarding our planet.

Neimeyer also shares various efforts she makes on the mission to be environmentally conscious, including being wary of how far her food travels, gas mileage, and buying up-cycled clothing from Thredup.

From the Greenland ice sheet’s fast-paced melting speeds to the unknown substances that may lie in its ice, there are very real events and with them, consequences.

Chen leaves us with how these things can be brought back to light.

“Art in all its forms… and activism can be used in harmony to overcome apathy and desensitization,” Chen said.