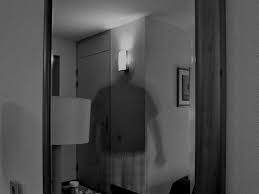 I was frozen in place in terror looking at my wall. My dad got out of bed and came into my room.

“Arthur what happened?” Dad said also looking at my wall.

I didn’t say anything; I didn’t know what to say. My face was eggshell white, I have never stuttered in my life but I couldn’t gather my words to fully articulate to my dad how I felt. I was so tired I just got into my bed and went to sleep. When I woke up the next morning, my friends blew up my phone asking where I went and if I was okay. I just responded to them saying there was a family emergency so I had to head home. I got ready for school and went downstairs to go eat breakfast. My dad didn’t say anything about what we saw last night and neither did I; everyone was already on edge so there was no reason for us to say anything. On the way to school I was just thinking about what this thing is that is oppressing me and my family.

I was on my laptop trying to find some type of research on my house. When I looked up the Humphrey Plantation, a bunch of websites came up. I clicked on a website that explored the different plantations in Texas and then clicked on this one article and what I read shook me to my core.

“Audreyville: a town of murder and witchcraft”

They had the story that truck driver told us, but he left out a crucial detail, “Martha, the voodoo priestess who many believe was helping Humphrey, had two children; the oldest, Elijah, and the youngest, Nathaniel. When Martha refused to offer her services to Humphrey, he hung Elijah. Martha tried to kill him and he hung her in the same spot where Elijah was killed.  Legend has it that Martha placed a curse on the property and on anyone who moved in. Nathaniel was never found; many say that he moved to the north to escape, others think he was caught by slave hunters and killed.  I understand that the plantation was renovated and put on the market; please if you live or know anyone who lives in the house and has experienced any paranormal events contact me at,”

I was locked in, staring at my laptop; I didn’t even notice that Alex came in.

I didn’t even say anything, I just handed her my computer. She read the article and asked me if I was going to call the number.

The number belonged to someone named Heather Young, I put the number in my phone and asked Mrs. Farley if I could step outside.  The phone rang twice and a voice said,

“Heather Young, paranormal journalist, how can I help you?”

“Hi my name is Arthur Smith, I live in Audreyville Texas…”

And before I could finish she asked me, “You bought the Humphrey Plantation didn’t you?”

“What has happened to you while you have been there?”

I explained everything to her.

“Arthur would I be able to stop by the house?” She asked.

I told her I would have to check with my parents and then I would get back to her; she told me to get back to her as soon as I could. I said okay and I hung up the phone. I called my mom directly after and she surprisingly said that it was okay. I think she wanted resolution to this issue as bad as I did. I told Heather that it was okay and she said she could be at my house as early as tomorrow morning. I walked back into class somewhat hopeful that now there might be an answer to this problem.  I told Alex what Heather said and Alex asked if she could come along too when Heather got there. I didn’t see an issue with it so I said yes.

School was over, Alex and I didn’t see a reason to go the library anymore, so I text her to see if she wanted to do anything else. She said yes, so we met at my car and went to go see a movie. I dropped her off at her house, said goodnight and drove back home. The writing that was on my wall was gone. My bathroom light was on, which was weird because I was the only one home.  I went in and there was a shadow of someone in my shower. I went to pull back the curtain, the lights cut out and I was dragged in the dark.