Would you risk your life for billions of dollars? 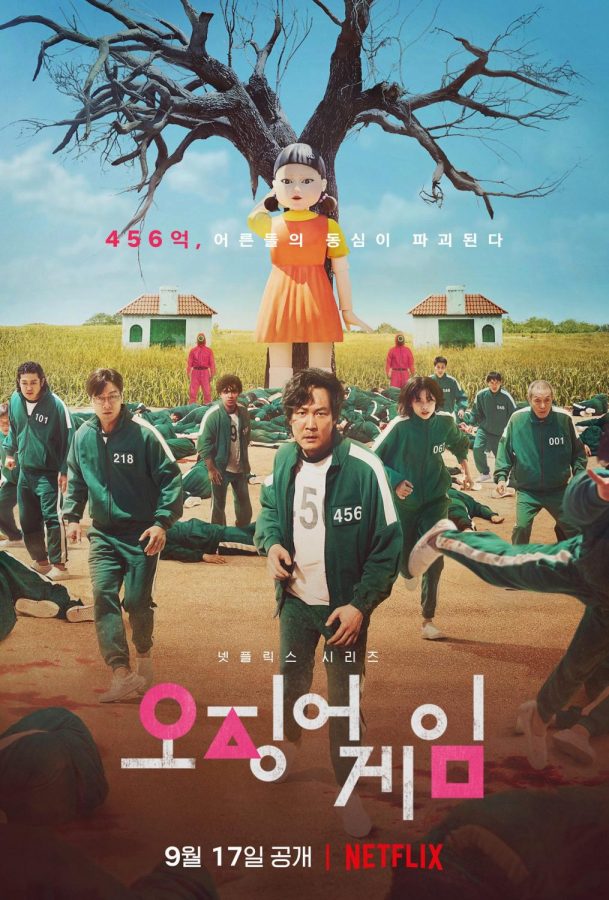 Netflix original, “Squid Game,” has recently taken over the media by surprise. From its visuals to amazing story line, this Korean drama will leave you at the edge of your seat and wanting more.

For those who have been living under a rock, “Squid Game” is about a group of indebted people in South Korea that compete for their survival and the thing they desperately need the most: cash. Hundreds of individuals play six rounds of childhood games like Red Light, Green light under a time limit. While the games seem good, the odds of survival are not. Each character is faced with a life or death situation and 45 million won ($38 million US) at stake. From its anti-capitalist themes and thrilling story line, this show is sure to be a must-see for all individuals.

When I first started watching “Squid Game,” I didn’t know what to expect, but I was instantly blown away by this dystopian thriller.  The director, Hwang Dong-hyuk, did an amazing job at critiquing capitalism and classism by using dark themes, foreshadowing, and gruesome death scenes to grip the audience.

“My thoughts on ‘Squid Game’ after finishing were all over the place,” Monet Falomir said. “I loved the story line and I think it had a great commentary on just how poorly our economy is structured, to the point where hundreds of people will risk their lives (twice) just for a shot at ridding themselves of their debt.  It’s a situation that many lower and middle class people would understand and empathize with. The show portrays the message of how people in need will sometimes put their own lives in harm’s way if it means there’s even a slight possibility of having a better life.”

“Squid Game” uses wealth inequality and different realistic struggles such as debt to empathize the economic exploitation people go through. The main players also have realistic backstories that allow the audience to understand why each character needs to participate in the games a second time.

Jeyna Espinosa, a fan of “Squid Game,” also added that many people will go through great lengths to survive while rich people watch their suffering and view it as entertainment with little to no sympathy.

“I believe ‘Squid Game’ represents classism,” Milo Espinosa said. “Those who are less fortunate are looked down upon by those on a higher stand (the rich). The players are very poor people who are in extreme debt and they are viewed as entertainment for betting. It just shows how inhumane and horrible classism can be. In addition to that, the show reveals the different sides of humanity – the stages in which the characters would go through as they try to win the game. It made me acknowledge – on a deeper level – the ugliness of humanity itself. Not only can people be viewed as only pieces of a game (horses in a race) but people can tragically change for the worst or better.”

Many fans like Falomir and Espinosa feel as if the show is symbolism for classism and capitalism. You have the Frontman hosting a watch party for the so-called VIPs and the higher class (VIPs) watching the players risk their lives for their sole entertainment. They are quite literally looking down at the players – with no respect for human life, only ignorance and privilege. Watching from above is their source of amusement and they only see the competitors as “horses from a race.”

While “Squid Game” focused on dark themes like classism and capitalism, Hwang Dong-hyuk also used foreshadowing to intensify the story line. If you re-watch the series closely, you could pick up on the many things you missed before. In the beginning of the series, you could see the beds stacked high due to the amount of players participating. As the number of competitors decrease, the guards remove their beds one by one. The pictures on the walls become more visible to provide hints and clues for the next game.

You wouldn’t realize this, but “Squid Game” also foreshadows the deaths of the many players. For example, when Gi-Hun (Lee Jung-Jae), the protagonist and winner, swore on his mother’s life, found his mother dead after returning home the second time. Or when Ali (Anupam Tripathi), who stole money from his boss, was eliminated after Sang-Woo (Park Hae Soo) stole his marbles and replaced it with rocks. Pretty crazy, right?

“Squid Game” obviously deserves all its hype and popularity. The dystopian thriller used topics such as classism and capitalism as a metaphor and foreshadowing that perfectly fits the flow of the story line.

With this, I end in a last and final quote from another great director, Bong Joon-ho,”Once you overcome the 1-inch tall barrier of subtitles, you will be introduced to so many more amazing films.”

Feel free to share your thoughts on “Squid Game” in the comments! Thank you!