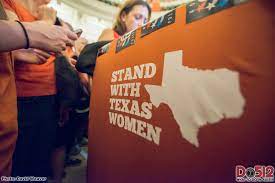 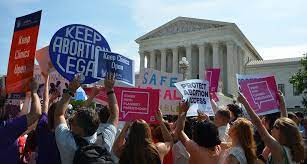 One of the more sensitive topics, not only in the United States but around the world, is abortion. Some see abortion as a bad thing, others see it as a good thing.  Texas is no stranger to dealing with this issue; they are a Republican state so they are against abortion.

January 22, 1973, in one of the more popular Supreme Court cases in history, had Jane Roe (a often used court alias used for anonymity in court) go head to head with Henry Wade, the district attorney for Dallas Texas.  Due process of the law tied together with the 14th amendment and Jane Roe’s right to privacy, found abortion to fall under the topic of right to privacy.

The decision of this case was that in the first trimester of a woman’s pregnancy, the state cannot regulate what the woman does. That is completely up to her and her physician. During the second trimester, however, the government could step in and act if they have concerns reasonably related to the woman’s maternal health. During the third trimester, when the fetus has reached the point of viability, the state government can say no to the abortion all together.

So the court case ended in some what of a compromise and that is how it has been in Texas until September 1 of this year.  The Texas Heartbeat Act states that in the first six weeks of the the pregnancy, the abortion can stand, but after that the person who received the abortion and anyone who aided or assisted in the abortion, can be criminally charged.

In the Article “Analysis: Texas legislators, with an assist from the U.S. Supreme Court, open a Pandora’s Box”  written by Ross Ramsey Justice, Steven Breyer is quoted saying, “Texas’s law delegates to private individuals the power to prevent a woman from obtaining an abortion during the first stage of pregnancy. But a woman has a federal constitutional right to obtain an abortion during the first stage.” Right to privacy is one of the main concerns when it comes to abortion.

I had the opportunity to speak with Araceli Gomez, a student here at Roosevelt regarding this issue.

When I asked her about the concept of abortion she had this to say, “Women can do whatever they want with their bodies as long as it’s not past the whole part where there’s a heartbeat going on or the baby has already been born if it’s in the fetus stage I think it’s okay.” So she is on the side of yes you can get an abortion as long as there is not a heartbeat.

When asked about the abortion law in Texas she had this to say, “I think it’s wrong and that it’s stupid, that women should do whatever they want with their body and there are so many negative parts to it that men didn’t even look into and I don’t think that men should have control over women’s bodies, they have no say on it.” Her argument is that women can do what they want with their bodies and that men should have little to no say in the matter.

When discussing life there are always going to be disagreements, some are going to be pro-life, others are going to be pro-choice; we should always take into account everyone’s opinion because that is how our nation thrives, by people having an opinion in matters like these. If we all listen, maybe on day we can come to a resolution on this issue.