John Cena is a BakuDeku Shipper? 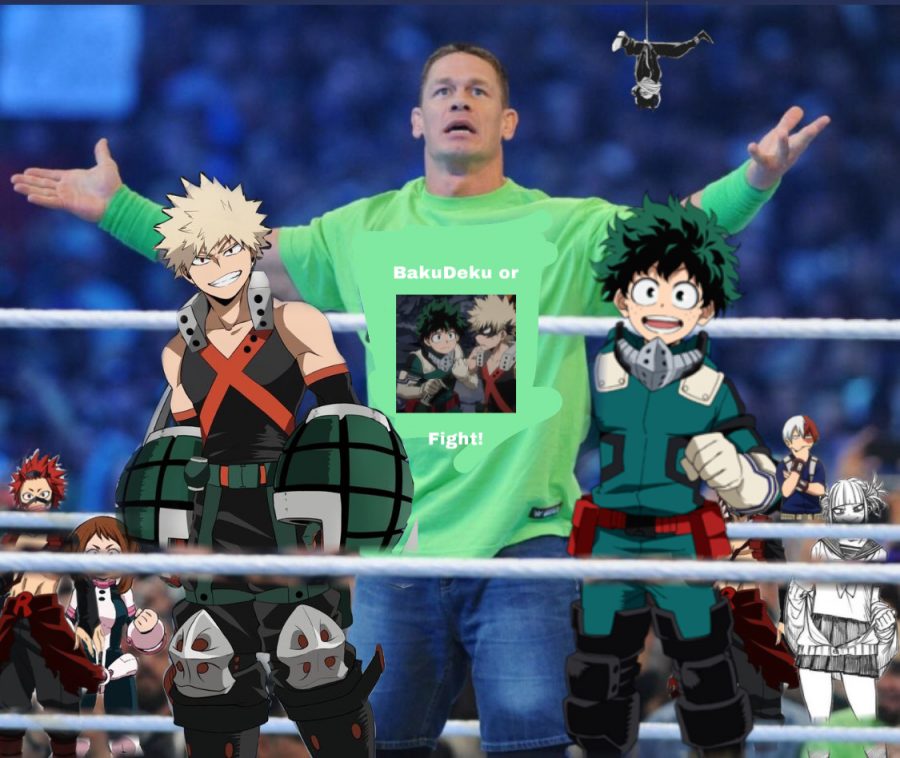 An poor edit where John Cena is giving a speech about BakuDeku to other MHA characters while Bakugo and Deku stand next to him.

We all know this time line is falling apart, but I genuinely think this is what broke my mind. John Cena is a BakuDeku shipper?

For context, there is a very popular manga and anime series called “My Hero Academia” (MHA). The story takes place in a world where superpowers, called quirks, are normal in humans. Izuku “Deku” Midoriya, the story’s protagonist, is born quirkless, but is gifted a quirk by his idol, All Might. My Hero Academia’s plot follows Midoriya’s time at UA, a prestigious pro-hero high school, and this journey to becoming Japan’s Number One Hero.

MHA has a colorful cast of characters, but you only need to know three for this article to make sense: Izuku “Deku” Midoriya, Katsuki Bakugo, Deku’s childhood bully turned rival, and Eijiro Kirishima, Bakugo’s “manly” best friend and fellow UA student that is often shipped with Bakugo.

I understand some of you are rightfully confused. Brianne thank you for the info on the show, but what does this have to do with John Cena? Wonderful question, my dear reader!

John Cena follows multiple twitter accounts that are dedicated to the shipping of Izuku Midoriya and Katsuki Bakugo, better known by their ship name, BakuDeku! But that isn’t all!

*Kin or Kinning, as it has been explained to me, is having a personal or emotional connection with a character from fiction or seeing yourself as that character. A kinnie is the name of people who kins a character, so a Kirishima kinnie is someone who kins Kirishima.

The official MHA twitter has taken the time to tweet Cena saying “NEWS: Does WWE Superstar @JohnCena Love My Hero Academia?…” In a new thread they tweeted “Hello @John Cena” with a waving hand emoji and the next day tweeted, “thanks for following us back @JohnCena”.

I think the funniest part of this whole situation is that John Cena is either doing this, or he is allowing someone to do this. Do you think this is a publicity stunt or is he like Megan Thee Stallion and ready to talk about his love for MHA?

The fandom’s reaction is also quite enjoyable. Memes about John Cena have been popping up left and right. Twitter has exploded with conspiracy theories about John Cena’s involvement in the new MHA movie because of the similarities between Deku’s pose in the promo photo and John Cena’s “you can’t see me” pose. People are asking him questions about any and all things MHA.

Emily Papadakis-Van Doren, a fellow MHA fan said, “I think its hilarious. I like how celebrities are endorsing their fav animes. I think it’s making it easier to be a fan because it’s not as weird.” As a side note she included, “I do see him as a Kirishima kinnie though. I just- it makes so much sense.”

One main draw back is there has been some backlash about Cena’s choice in ship. Big fandoms always develop drama but the BakuDeku drama can be intense sometimes. The good thing is that even this has become a joke. People have been poking fun at how John Cena will no longer have to worry about his wrestling rivals when angry Anti-BakuDeku MHA fans are out for him.

John Cena has also inspired other manga/anime related events including @MicrosoftStore tweeting “Name a more iconic duo.” with an attached image of Killua and Gon from Hunter x Hunter. Someone replied with a gif of Midoriya and All Might to which the Microsoft Store twitter responded “Not Midoriya and Bakugo?”

My mind will continue to be blown as this situation plays out. I just have one thing to say to John Cena: