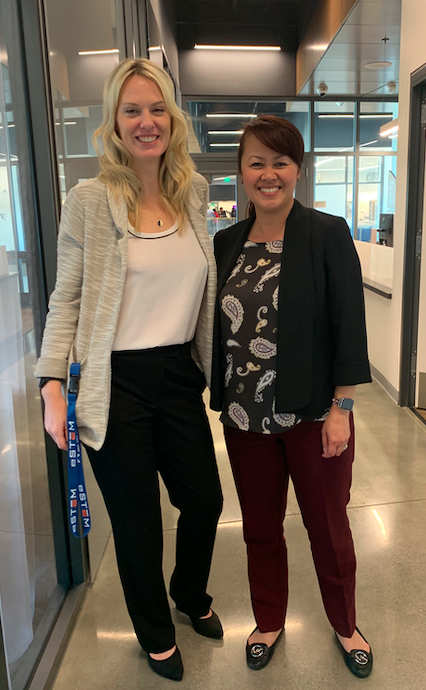 Image taken by Yesenia Collado at the ESTEM building.

You’re probably wondering, we have a dean? Wait what is a dean? Well yes, eSTEM does. A dean, in essence, is the head of either a college or university or a department. Dr. Law is the head of Eastvale STEM Academy though, so what does that make the new dean?

Well, I had the great pleasure of being able to speak with the new Dean, Kelly Howell, and ask her what specifically what a dean does and is it similar to an assistant principal. “Yes, it’s like an assistant principal because you have the main campus and then you have eSTEM. So there’s a director and a dean here versus a principal and assistant principals.” I then asked her whether she hoped to achieve anything or if she had any goals in mind, “Supporting students so that way they can meet their academic goals and supporting teachers so that way they can support students and just helping.” And if you’re still wondering what a Dean is, as she would put it, “If anyone needs anything that’s what my job is, just getting it to them and giving them support just like your principal or assistant principal or director its the same thing were all in administration. My specific job is for the stem school so administrating anything within the stem school it could be testing, it could be curriculum, it could be special needs, anything.”

Right, when I was on my way out of the eSTEM offices I happened to bump into Dr. Law who was having lunch and she so kindly agreed to be interviewed during her lunch break. I asked her what she believed the new Dean would contribute and she said, “You know the idea behind Eastvale STEM Academy is a school within a school. One administers running is almost impossible when you think about comparing it to JFK. We are at any given time in this building we have about a thousand students. And so JFK enrollments are about 600 right so that’s big and even the square footage here [eSTEM] is bigger. So we do need an additional administrative help and with the new Dean, her role is to support the teachers as well as to service the students. Really her role is to support and our needs in supporting the program. Everything from running our science and engineering research to supporting the stem ambassadors to supporting other students who have personal needs social-emotional or any of that nature.” I asked her whether she wanted to say anything else in regards to the new Dean and she said, “I’m just excited to have her on board. It’s kind of nice to not be doing everything on my own because this is a new building and we still have some construction issues because this isn’t finished, that isn’t working, this fell off and trying to handle that plus handle students I feel like I was putting so much effort into getting us moved in rather than having support. Having a Dean helps with that.”

Truthfully I believe that the Dean will definitely make a difference and relieve some stress off of Dr. Law at eSTEM and help support the staff and students alike.