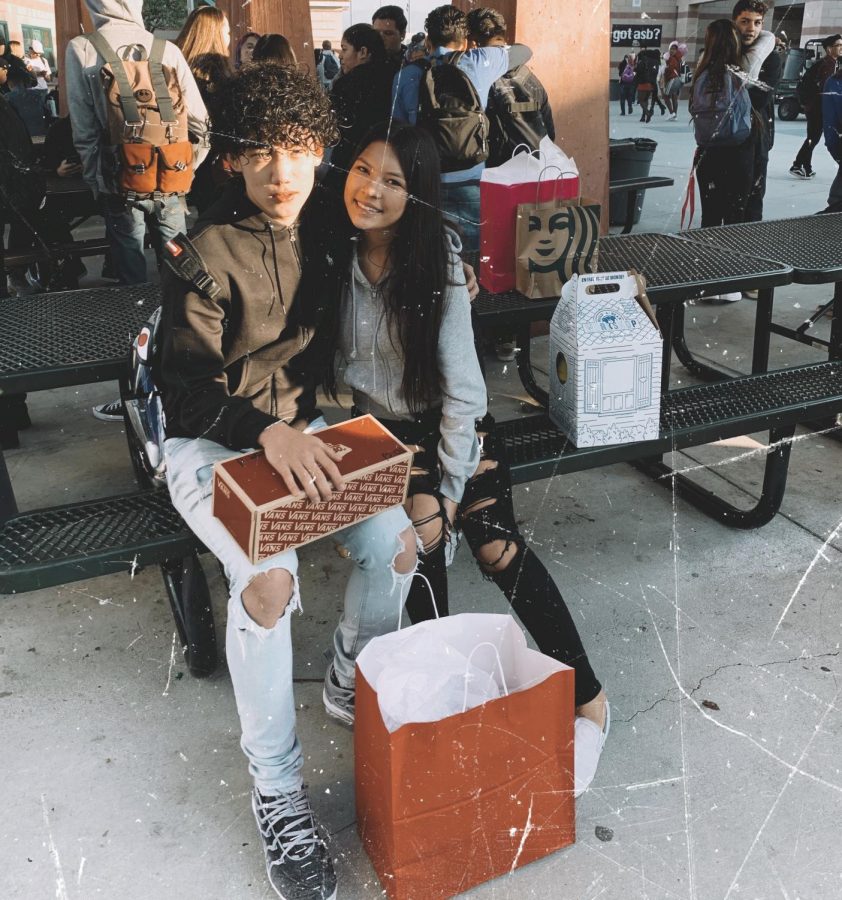 A cute couple with several gifts. The image was taken by Yesenia Collado

Now you’re probably thinking, this chick has to be single. Yes, well indeed you are correct, but as a mere observer of the chaos that ensues, I can say that Valentine’s day has become more of a big corporate idea. It becomes less about the love and more about the gift. Your significant other probably wants either some sort of sweets probably chocolate, a bed full of rose petals or a bouquet, balloons, etc. If you don’t or didn’t waste money, then good for you but that’s probably the biggest lie I’ve heard because you know very well that you bought your significant other some sort of adorable gift with a bouquet of roses.

But then again it also gives people hope since it might be the only day that a significant other can give them something. Maybe it’s just my mindset but if Valentine’s Day is the only day that the significant other stops to acknowledge the relationship and give gifts maybe its time to reconsider if that person really cares. I’m not saying that you should receive gifts constantly because that’s not what it’s supposed to be about, but rather the initial idea of being kind and loving all the time. It’s amazing to receive a gift from a friend as well but I really think the intent about giving gifts has gotten blown way out of proportion. It’s gotten to the point that many expect gifts and get disappointed when they don’t receive a gift or get what they wanted.

Historically there’s like 3 main origin stories about this specific holiday but I’m just going to give you a different story that isn’t like the others. Long ago, about a couple of hundred years ago, there was this guy who’s wife happened to be named Valentine and her birthday was on February 13 but he forgot. So on February 14 he went into his garden and picked the prettiest bright red flowers got down on one knee and accidentally said Happy Valentines Day from how nervous he was that he had forgotten her birthday the day before. A passerby witnessed the interaction and went into the garden and asked to buy some flowers from his garden. And so was Valentine’s day born.

Of course, we had to get the opinion of others today so I asked McKenna Backstrom, a junior, her thoughts on Valentine’s day and she said,” Honestly Valentine’s Day is okay but I don’t really like it that much if I’m being honest. I mean it’s a nice day to show your significant other that you care about them but shouldn’t that be every day?” She also said,” Oh Happy Valentine’s Day though!!” I was at Albertson’s browsing the candy section and one of the ladies who worked there, named Samantha, said, “If I were you I’d save my money and come back tomorrow and just tell that significant other that I forgot their gift at home.” I said that it was for me and she said, “Well, in that case, come back tomorrow and trust me, the candy you’re looking for will still be there.” I thought it was quite funny.

But Valentine’s day isn’t all about the gifts like big corporations want you to think. Congratulations to you entrepreneurs who sold some sort of gift today! Make sure if you see a street vendor selling flowers to buy their flowers because unlike big corporations you know exactly where your money is going to which is towards supporting families.

Yeah, so I guess it’s not so bad after all unless…